Businesses can also benefit through a variety of different applications such as PBX extensions, remote consolidation and call center. Product range starts from E1 with 8 simultaneous VoIP channels up to complete 8-stream E1supporting up to 120 simultaneous VoIP calls.
Tenor DX2030 uses its own proprietary SelectNet technology for stability control, packet loss and delays in speech path, and, if necessary, has an opportunity in the middle of a conversation, without interruption, to switch from the IP network to the telephony network and back.
Thanks to call routing MultiPath technology is possible to achieve the best combination of price and quality, Tenor DX2030 can intelligently route calls between the PBX on the one hand, and the PSTN or IP-network on the other. To reduce the communication costs Tenor DX2030 can also route calls over IP-based network, and then to transparently switch back to PSTN, in order to establish a connection with the subscribers outside of VoIP-network. No other solution offers such flexibility.
Due to the architecture of MultiPath, Tenor DX2030 is the only VoIP solution that can be installed without changes or improvements to the existing voice network, PBX and data networks. Tenor DX2030 can be connected to the data network via 10/100 Ethernet port, as well as to the public telephone network via E1, T1 or PRI.
Tenor is designed in such a way, so that in the event of system failure, even a total power failure, the calls will be routed through the existing telephone network.
Thanks to PacketSaver technology, Tenor DX2030 reduces IP-network load up to 57%, by joining several voice packets into one, thereby reducing the amount of transmitted information. However this option is available separately and is not included in the basic package.
One of the special characteristics of Tenor DX2030 VoIP Multipath Switch is also a unique technology, which allows working with NAT-enabled firewalls. Technically innovative NATAccess solution solves the problem of NAT-firewalls, which during a connection to the external caller incorrectly translate internal IP-addresses into public addresses. 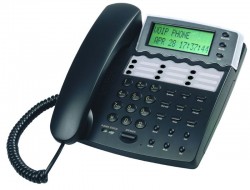 ATCOM AT-530P IP phone allows making calls around the world without the use PSTN. It has two integrated 10/100 Mbps Ethernet ports and allow using this phone with the existing Internet connection. Atcom AT530P supports Static IP, DHCP-client and PPPoE.

Since 1998, providing the expertise in Voice over IP, Hosted and Enterprise Class network services to provide complete, cost-effective solutions for your telecommunications and services. With in-house systems or our hosted solutions "NPS and VoiceCentrici